You’re invited to spend the weekend with three extraordinary sisters…

When she was sixteen, Dee Fortune kidnapped her two younger sisters and ran from danger. Now, twenty-nine, she’s still trying to control her shape-shifting power — no easy task when Danny James shows up one Friday morning with his deadly smile and dangerous questions about the past.

Lizzie is deturmined to save her family from financial ruin by turning straw into gold; now, if she could only stop turning forks into bunnies. The Rlric, a sorcerer, appears one Friday — annoyed with the chaos Lizzie is creating in the universe and his heart…

The youngest Miss Fortune, Mare, towers above her sisters but her telekinetic power is dwarfed by their gifts. She spends her days at Value Video!! and her nights contemplating the futility of her existence. But then a gorgeous Value Video!! VP and Mare’s long-lost love turn up…and they all turn up the heat on a weekend that no Fortune will soon forget!

The story behind the book begins with one night, three bestselling authors, and one big idea…

Anne Stuart: I thought Eileen had has too much fun at the cocktail party, but I’m well-behaved at all times, so I turned to Jenny and said, “What do you think?”

Jennifer Crusie: I thought they were both nuts. “What the hell,” I said. “I’m in.”

Eileen: And I didn’t know how to tell them it was a joke, so I was in.

Anne: And I can never resist a challange, so I was in.

Jenny: And then I said, “Let’s collaborate and make it a novel.” And here we are.

Eileen: And The Unfortunate Miss Fortunes turned out to be a really wonderful story about three sisters with supernatural powers whose aunt sends them their true loves so that she can steal their powers from them.

Anne: And then trouble ensues. So the moral of the story is: Don’t make jokes at cocktail parties with romance writers because we’ll write anything… 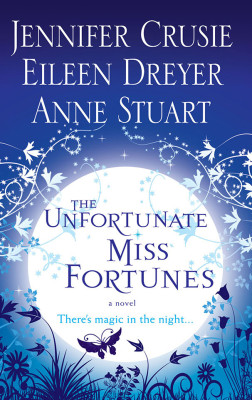