When Andie Miller goes to see her ex-husband, North Archer, to return ten years of uncashed alimony checks, he asks for one final favor: A distant cousin has died and left him guardian of two orphans who have driven out three nannies already; will she take the job? Bribed with money and a need for closure, Andie says yes, packs her bags, and heads for Southern Ohio.

But when she meets the two children she realizes things are much worse than she feared.  The children aren’t any run-of-the-mill delinquents, the creepy old house where they live is being run by the worst housekeeper since Mrs. Danvers, and something strange is happening at night.  Plus, Andie’s fiance thinks it’s a plan by North to get Andie back, and since Andie’s been dreaming about North since she arrived at the house, she’s not sure he isn’t right.

Then her ex-brother-in-law arrives with a duplicitous journalist and a self-doubting parapsychologist, closely followed by an annoyed medium, Andie’s tarot card–reading mother, her avenging ex-mother-in-law, and her jealous fiancé. Just when Andie’s sure things couldn’t get more complicated, North arrives to make her wonder if maybe this time things could be different….

From the beloved New York Times bestselling author Jennifer Crusie comes a novel that gives a new twist to old flames, second changes, and things that go bump in the night…
“Love has a ghost of a chance.”
August 2010 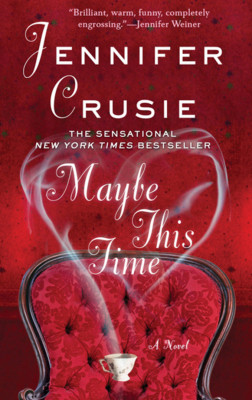 "Andie slammed the car door. "You know what I'd like for Christmas, Flo? Boundaries. You can gift me early if you'd like."

“Maybe This Time marks Crusie’s long-overdue return as one of the most deeply satisfying writers around.” -Bookpage
“Crusie's created a sharp cast of lonely souls, wacky weirdos, ghosts both good and bad, and unlikely heroes who are brave enough to give life and love one more try. You don't have to believe in the afterlife to relish this fun, bright romp.” —Publishers Weekly
“Crusie's sense of humor and knack for fun characters are all here.” —Library Journal
“As always, the greatest pleasure comes from watching Crusie put her great cast of quirky characters through their paces. This is a story of faith: in human nature, in love, in romance, in connections that cannot be broken. Crusie fans can rejoice in this original and funny romantic thriller.” —New York Journal of Books