Lucy Armstrong has come to Savannah to finish the last four days of filming on a romantic action movie called Don’t Look Down. What should be an easy shoot is made a lot more difficult by the stunt coordinator (Lucy’s ex-husband, Connor Nash), the script supervisor (Lucy’s very unhappy sister, Daisy), an inquisitive five-year-old (Lucy’s niece, Pepper), the backer (a sinister Irishman named Finnegan), and one strong and silent stunt man (J. T. Wilder, the stuff Lucy’s dreams are made of). Then she starts to look beneath the surface and realizes that, unless she finds out what’s going on fast, the movie isn’t going to be the only thing that’s finished in four days.

J. T. Wilder has come to Savannah to make some quick money as a stunt double while on leave from the Army (he’s a Green Beret). What should be an easy job is made a lot more difficult by the star he’s doubling for (goofball Bryce McKay), the starlet who’s intent on seducing him (Althea Bergdorf, not that he’s putting up much of a fight), his skirt-chasing best friend (gonzo-pilot Rene LaFavre), an eagle-eyed five-year-old (binocular-toting Pepper Armstrong), and a tough, exasperated director (Lucy Armstrong, the stuff Wilder’s dreams are starting to be made of). Then the CIA calls and Wilder realizes that somebody is taking “shooting a movie” much too literally.

A book about real men, real women, and real gators, Don’t Look Down is the perfect blend of he said/she said, excitement and romance, Mayer and Crusie. 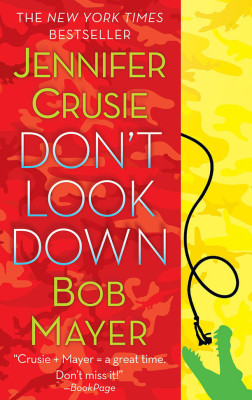 “Wilder watched Armstrong head back to video village under the lights of the set, attacking another apple as she went, and thought, Apples and women. Not a good history there.”