One of fiction’s most well-loved novels, this 19th-century classic continues to capture the hearts of contemporary readers with its notions of marriage, dating, and romance. Leading authors in the area of women’s literature and romance contribute to this fresh collection of essays on everything from Lydia’s scandalous marriage to George Wickham to the female-dominated Bennett household and the emphasis placed on courtship and marriage. Contributors include Jo Beverly, Alesia Holliday, Mercedes Lackey, Joyce Millman, and Jill Winters. This compilation is an excellent companion for both those new to Jane Austen and well-versed Austen-philes.

When the good people at BenBella Books asked me to guest edit Flirting with Pride and Prejudice, I jumped at it. Then I thought, “Why did I do that?” It wasn’t because the book’s a classic; they could have offered me Flirting with Bleak House, and I would have claimed a previous deadline. It wasn’t that it was my favorite book; I hadn’t read it in fifteen years, not since I wrote that grad school paper defending Charlotte’s choice of husband. It wasn’t even that it was the mother of all romance novels; I love my genre, but I’m not a slave to it. So I thought about what it is that makes Pride and Prejudice such a prom queen of a topic, not only for me but for all the writers who signed on to write about it and all the readers who were going to pick this anthology up to read about it (that would be you).

To begin with, there’s the author: Our Jane. People get passionate about Austen: the purity of her prose, the vividness of her characters, the reverberation of her underlying nineteenth-century snark. She wrote of a time, but also beyond it. Her voice continues to enchant and enthrall; she’s one of the Top Ten Dead People We’d Like to Have Dinner With. But if the BenBella people had offered me Flirting with Emma, I would still have had a pressing deadline.

So maybe it’s the characters: poor but proud Elizabeth; rich and proud Darcy; suffering Charlotte and insufferable Collins; Lydia the slut, Kitty the twit and Mary the prig; the Nightmare Mother and the Careless Father; Wickham the rake and Bingley the sweet; and Lady Catherine, the Character Most Likely to Crush a Tenant under the Wheels of Her Carriage. That’s one heck of a cast Austen’s got going there, and I admit that for the characters alone I might have signed on. Except I really did have a previous deadline.

But then there’s that story: the wolf at the door, or at least at the gate, comic proposals and cutting asides, seduction and betrayal, disdain and heartbreak, the low raised high, the high brought low, and one in the eye for Lady Catherine… Oh, there’s a lot to love in this narrative. But it can’t be just that—the story’s been told and retold, adopted into other cultures and adapted into chick-lit, and I’m not standing in line for any of that. I’d have been too busy to do Flirting with Bridget Jones, too.

No, what makes Pride and Prejudice irresistible is the perfect combination of all those forces: the sly but ultimately sympathetic wit, the prose so clear you forget you’re reading, the flailing, failing, enthralling cast and the richly over-plotted, understated story. It’s like a great dessert that’s good for you, a guilty pleasure you don’t have to feel guilty about. The good are rewarded, the bad get burned and we close the book knowing they’re still milling about in there, Wickham putting up with Lydia as his punishment for being a rat, Jane and Bingley in clueless contentment and Elizabeth teaching Darcy how to laugh while not inviting Lady Catherine to dinner.

And that, I think, is the key to this anthology. The novel is so alive in our hearts that we want to know what the characters were doing off the page while our attention was directed elsewhere, what happened to them after the book was done, how they’d fare today in modern London, modern Bombay, modern anywhere. We want to chat about what ten thousand pounds a year meant, why all those party boys were in uniform; we want to compare the plights of the characters to our plights, wonder what would happen if things had been different. . . .

Face it. We just like thinking about Pride and Prejudice.

Clearly, this is not an anthology of Studies on the Work (for that, see Norton, et. al.). It’s more of a series of Dates with Jane, where some writers were serious about her, some were looking for a good time and some, frankly, took advantage of her. But don’t worry that any damage has been done. In one hundred and ninety-three years of wear, tear and academic assaults, not to mention countless adaptations, Pride and Prejudice has remained unchanged, except that Darcy now looks like Colin Firth. The affectionate attention these writers have paid can only enhance the experience of loving the novel. Really, all they did was, well, flirt a little.

How could I refuse to introduce a book like that?

So welcome to BenBella’s party for Pride and Prejudice. It’s informal, and we’re easygoing, so get yourself a drink (negus, margarita or Diet Coke, your choice), kick back and read on. This is worth missing a deadline for. 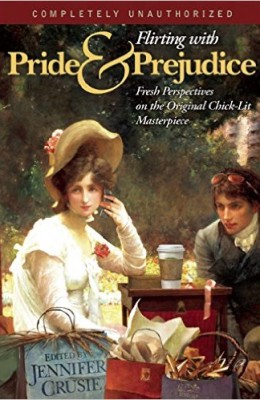